We have been extremely busy at Pinhook Flats and CUE this summer! We welcomed over 70 new residents in 54 apartments! WOW! You can only imagine the great experiences we’ve had meeting all of our new residents and finding them the perfect home. Through the latter part of summer, we have been upgrading select units, and plan to continue this through the fall. This will be happening at both properties!

Both communities have their own unique features. The larger of the two communities with 182 units, is Pinhook Flats. This complex features floorplans named after famous racehorses as homage to The Ak-Sar-Ben Race Track and Coliseum which closed in 1995. Residents can personalize their apartment in a special way by choosing an accent wall color from our color palette. How fun! Some of the upgrades that are happening here are all new stainless-steel appliances in the kitchen, new wood vinyl flooring, and new carpet in the bedroom(s). This beautiful new look is hard to pass up. See vinyl flooring photo below!

Across the street from Pinhook Flats sits CUE. This community is much smaller in overall size, holding only 45 units, but packs a punch with modern charm. This red-carpet themed complex features all sorts of fun movie theater/Hollywood décor. All units receive a beautiful fresh coat of white paint on the trim, doors, and ceiling. The stainless-steel kitchen appliances, wood vinyl flooring and new carpet are all upgrade options here as well. Included are photos of the stainless-steel and the white trim/doors.

Many of our apartments for future availability will feature these beautiful upgrades. Call the office today to inquire about upcoming availability! 402.715.5863 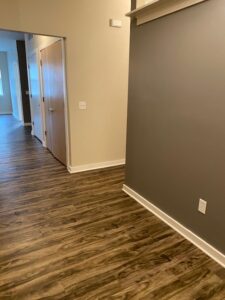 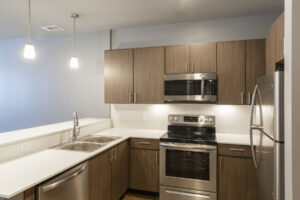 Theater comes alive on many stages in Omaha. Omaha is well known for its theater and performing arts with a variety of performances and stages throughout the area.

The Blue Barn Theater is known for its innovative productions and powerful acting ensemble. The Rose Theater, housed in a beautifully restored 1927 vaudeville palace, is dedicated to shows especially for children and families. The Omaha Symphony’s talented musicians and guest artists create awe-inspiring performances at the Holland Center for Performing Arts, considered one of the best sounding concert venues in the country. The historic Orpheum Theater is home to many local and national stage productions including Opera Omaha with its exquisite take on the classics.

Professionally managed by Omaha Performing Arts, Omaha’s celebrated Orpheum Theater has served as the home of the finest in local and national performing arts for nearly a century, including the best of Broadway’s national touring companies. Located in Downtown Omaha, the Orpheum underwent a major $10 million renovation in 2002 and this magnificent theater was enhanced to better serve patrons and artists. A cornerstone of Omaha’s cultural history, this former vaudeville house was constructed in 1927. Recent renovations have restored it and enhanced the theater’s acoustics and views.

Construction is going smoothly! CUE will bring some extra excitement to the Aksarben Village neighborhood; with modern floor plans and high-end finishes, available for July & August move-ins. Amenities will be shared with Pinhook Flats, yet CUE will have some of its own exclusive features not available to Pinhook residents. Give Jackie or Brandon a call to discuss CUE details : 402.715.5863.

Now accepting applications for studio and one bedroom apartments. If you or someone you know is looking for a brand new apartment in one of the best neighborhoods in Omaha, look no further! Everyone deserves a little CUE in their life.

Visit & ‘like’ our Pinhook Flats & CUE Facebook pages, where you can stay up to date on the latest news! 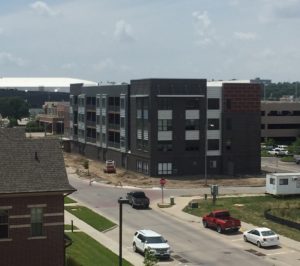