The two had dinner at Avoli, an Italian restaurant on Underwood Avenue. Dario Schicke, chef and owner, said there were five people in the group, including Susan Buffett, Warren’s daughter. Schicke said they arrived at 7 p.m. and left around 9:30 p.m.

“We had a special dish — gluten-free pasta for Paul … Sir Paul,” Schicke said, adding that the group had “some appetizers and sorbetto afterward.”

He said customers were snapping lots of pictures, as did Schicke.

“I did sneak in a couple photos for my daughters,” he said.

After dinner, the group went up the street to eCreamery.

McCartney, who arrived in a limo, had two scoops of eCreamery vanilla, said clerk Josh Ryan. The shop’s vanilla ice cream recently was named best in Omaha in The World-Herald’s Food Prowl feature.

The pair stayed at the shop for about 15 minutes, Ryan said.

He said he was excited to wait on McCartney, who’s scheduled to perform tonight at Lincoln’s Pinnacle Bank Arena.

“I couldn’t breathe,” Ryan said. “It was awesome.”

He said McCartney was “very polite and super nice.”

Jeff French, a psychology professor at the University of Nebraska at Omaha, was in line at eCreamery behind the former Beatle and the Omaha billionaire. French saw McCartney in concert 24 years ago in Maracanã Stadium in Rio de Janeiro, where Sunday’s World Cup Final was played.

“On the way out, I made eye contact and initiated conversation with him,” French said. “I reminded him that the first half of the concert in Brazil was all Wings songs, and everyone sat politely. The second half was all Beatles tunes, and everyone in the crowd was singing along, every word. It was a spectacular concert.”

French would agree with Ryan about McCartney’s manners.

“He deserves to be called ‘Sir’ because he’s nothing but polite.”

The group went across the street to sit on a bench and enjoy their ice cream, French said. About 50 people had gathered outside the ice cream shop, but French said it was a casual Omaha crowd that applauded when the group left.

Onlookers got photos of McCartney in the limousine in front of the shop. People also gathered and took group photos in front of eCreamery after McCartney left.

Many passers-by tweeted their sightings — much as people did 4½ years ago, when U2’s Bono made a surprise visit to the Dundee Dell. 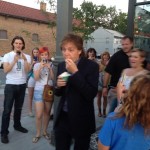