South Park Apartments prides itself on its tight knit community and staff. We wanted to give everyone a closer look into the guys that keep South Park running- Chris and Ken:

Chris W. is our maintenance technician. Before joining the crew at Robert Hancock & Co., Chris worked a plethora of handy-man jobs. He installed dry wall, installed glass and even worked on the SkyFari at our very own Henry Doorly Zoo! Once while doing routine maintenance on the SkyFari, a rhinoceros charged at the lift that was suspending him in mid-air. Now, we can’t compete with that excitement, but we are sure happy to have him as part of our team. Chris loves to golf and fish in his free time and is always hungry for pizza, tacos and any type of seafood. We asked him to do the impossible- pick his favorite thing about working at South Park- and he said it is getting to know the residents and being involved with such a kind community of people!

Ken J. is our beloved grounds man on the property. Ken was born in Denver, CO but was raised here in Omaha, NE. He has 12 siblings and his fondest memories were going to a small town in Nebraska to put up hay every summer. This spawned his love of the outdoors. He is always hungry for Mexican food and mashed potatoes. He loves cribbage and is teaching himself to play the trumpet for the second time. Rock on, Ken! He has been part of the Robert Hancock & Co. family for nearly 14 years. When we asked him the same difficult question as Chris, he agreed that his favorite part about working at South Park is the community that cares and looks out for each other.

Thank you Chris and Ken for all of your dedication to South Park! 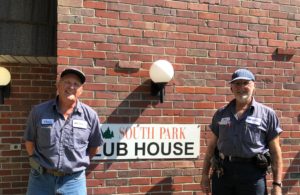